KCRW Session: Audio + Video 25.05.07 “There’s nothing like a good rock band” says Nic while walking over to the glass that separates master control from the totally rockin’ live performance going on in the main studio. The Electric Soft Parade was exactly what Harcourt and co. needed on a sleepy day kicking off a holiday weekend here in the U.S. Nic mentioned it and singer Thomas White replied that “it’s always a holiday in the UK”. Fair enough. The song we have been playing a lot of, If That’s The Case, Then I Don’t Know was definitely a highlight. Check out this performance – you won’t be disappointed (click photo!!) 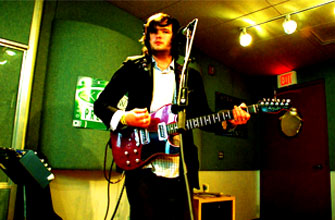 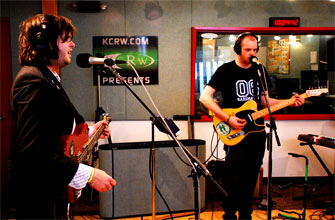 Maxwells Audio + Video 15.06.07 Cold World, Have You Ever Felt Like It’s Too Late, Everybody Wants.

musicsnobbery.com …it got better and better with each song. Cold World came off as lively and fun. Have You Ever Felt Like It’s Too Late was great as well – a lot of power was packed into that song, even though it’s just four guys and a keyboard. Of all the bands tonight, they were the most chatty and enthusiastic to be playing Maxwell’s.

musicslut.blogspot.com Brighton natives, Electric Soft Parade, opened the show with their unique and adoring blend of mid-’90s Britpop and straight-up indie, alongside hints of atmospheric post-rock. For a reference point, attempt to imagine Super Furry Animals, The Strokes, Badly Drawn Boy, Doves and Damon Albarn all trapped in the same room working on a charity single.

Pela’s Tour Blog: Their webmaster writes… First up was Electric Soft Parade. They were tight and very professional, with a harder edge than I had expected. All of them are excellent musicians but the standout, for me, was drummer Mathew Priest, who just may be the reincarnation of Keith Moon. Since the bands are sharing equipment, I was afraid that Tom (Pela) wouldn’t have anything left of his kit after ESP’s set, but it held up. By the end of their set, I was converted. Check ’em out – I think you’ll like them a lot. ESP are great guys.

Underground Bee: …I enjoyed their performance quite a bit. It’s in a similar vein to Brakes, with less country twang and a little more Robyn Hitchcock Britishness.

Perfect Porridge After waiting nearly five years since our first exposure to Holes In The Wall, we finally got to see Brighton’s Electric Soft Parade at 400 Bar last night. Tearing through a set of older tracks, new ones from the new disc, No Need to be Downhearted, and a closer off the Human Body EP, brothers Tom and Alex White quickly won over the small club with their dynamic songwriting and lush soundscapes – prompting the night’s continous heckler to shout, “You’ll be headlining First Avenue this time next year”. ESP also made multiple references to the Spin.com review of their Denver gig the night before.

SPIN.com: …instantly warmed the crowd with a concise, yet potent, sampling of sturdy Brit pop psychedelia. A Beating Heart and Cold World, both featured on 2006’s The Human Body EP set the act’s commanding, 40-minute set in motion. By the third number, Silent to the Dark, their Beach Boys meets the Charlatans sound had the early arrivals hooked. The brothers White appeared to enjoy playing to the responsive audience. “We’ve had a couple of dead nights, so this is great! It’s good to be a 400 light years from home”

As the free form performance continued, fans were treated to Misunderstanding and Have You Ever Felt Like It’s Too Late, both featured on No Need to be Downhearted; If That’s The Case, Then I Don’t Know, the evening’s mightiest number, was dedicated to a lone fan at the foot of the stage sporting an ear-to-ear grin. A sincere thank you to “a sweet crowd” which had nearly packed the revered concert hub, followed by a cerebral alt-rock finale, sealed the deal.

Wayward Panties: Electric Soft Parade started the night out at the Hi-Dive. This Brit pop band played songs that were a little reminiscent of Weezer during the Green album and they had one hell of a front man. Thomas White possesses all the quintessential traits for the position – witty banter, picture posing and the occasionally high kick thrown in for good measure. They ended with a finale so rockin’ I was decently sure they were going to smash a guitar or possibly the drum set even though it belonged to fellow touring band Pela.

Merry Swankster: at Hi-Dive… During the show I realized an unannounced sideshow would include a terribly intrusive and aggressive photographer. Dude would lean into the stage to get inches away from the bands so he could attack them with a barrage of flashes. Before I’m accused of being a finicky music dork, I should tell you that the guitarist of Electric Soft Parade yelled at the guy after a particularly vicious strobe of hits. Perturbed and at wits end he yelled directly at him, “Flash! Flash! Flash! Flash!” Unfortunately we didn’t have a microphone to yell into so instead I took pictures of him and am now blogging it…

Mystik Spiral Electric Soft Parade took the stage at about 9.30 and played a great set. Since I’m a sucker for both funny banter and Brighton accents, they were definitely right up my alley. Seems they were in Salt Lake City last night, where there was no drinking, and the crowd was “all-ages emo shit”. “F*** Oh, jesus, I said f*** Oh shit, I said jesus. Oh f*** I said shit. People buggered off!” Well, maybe you had to be there… I really enjoyed them. It seemed that nearly every song they played was a single in the UK… good, british pop for sure. We were thanked profusely for “coming out early and actually watching”.

The Stranger Their latest CD impresses with a mix of clangy guitar, tidy melodies, and a touch of that signature Brit-pop fizz – block the exits if they try to leave Chop Suey without playing Cold World, a brilliant piece of piano pop.

NME.com: Brakes and Electric Soft Parade won over a packed house at Club NME, Los Angeles. “It’s good that we’ve got another set because I’ve got a lot of energy and if that were it, I’d be p***** off” Tom White told NME.com between sets. “It’s a pleasure to play Club NME in Los Angeles” added Alex. “We do Club NME in the UK and it’s a really different vibe. But we like being here – it’s a good audience”

sddialedin.com This was the first stop on Electric Soft Parade’s tour, and they mentioned more than once that they only arrived yesterday and were feeling jet-lagged, but fortunately that wasn’t evident in the performance. They played the Casbah in March and it was great seeing them so soon after.

itstoosunnyouthere.com I saw the Electric Soft Parade last time they came through town and played a free show at the Casbah. They were great then, and even better this time around. I recognized a few of the songs, most noticeably If That’s the Case, Then I Don’t Know, which is the current single. Pretty good for the fact that I didn’t have their CD and had only seen them live once before. San Diego has been graced with both their first “proper” U.S. show (back in March, immediately after they played SXSW) and the first show on their current U.S. tour. The band played a pretty tight set, and Tom White (vocals/guitar) wasn’t lacking in either charisma or wit. The Electric Soft Parade was definitely the most upbeat band of the evening.

dandelife.com: They powered through the show and impressed me with their tunes. Imagine mixing some of the tonality of the latter Radiohead with the stage presence of Oasis and the key-shifting and rhythm-changing musical antics of a Modest Mouse.

LA TIMES CRITIC’S CHOICE: Yet another Brighton entry in the pop derby, Alex and Tom White, the brothers who lead the Parade, display songcraft more readily associated with a Bacharach or Sondheim, but they can also rock. Their current album is a treasure of melody, with no less than over the half the album sticking persistently in your head.

blog.myspace.com/cleomarie: The new stuff they have is a fusion of the classy, hooky, but yet rocked-out sound and feel of the first album, combined with the more intricate and subtle sound that infused the 2nd album. For all the genius that you can hear on the recorded songs, you have really not heard this band’s potential until you have seen them live.

Mercury News: An intelligent, sophisticated British pop band led by two brothers from Brighton, can bring you up like Squeeze (check out Life in the Backseat) or down like Elliott Smith. They make their Bay Area debut Friday at the Portable, an all-ages club on the grounds of the South Valley Christian Church.