Quotes collected back in 2002 (taken from my old fansite)

Tom talks to The Fly about Holes In The Wall

This album is hopefully going to create, hopefully going to express a time for us, a moment in the development of the band, just that mad, stupid thing, however you want to phrase it, it will hopefully be a kind of little place. We’ve just done two more tracks for it, one of them starts off like a Trail Of Dead-esque thing and then it goes into this insane, Manics-esque punky verse, and then there’s a big, fat chorus.

From: Designer Magazine (the dot com at the end of that interview is not their website anymore)

When you talk about influences you mention the like of The Boo Radleys and The Charlatans. They’re not your usual reference points are they? 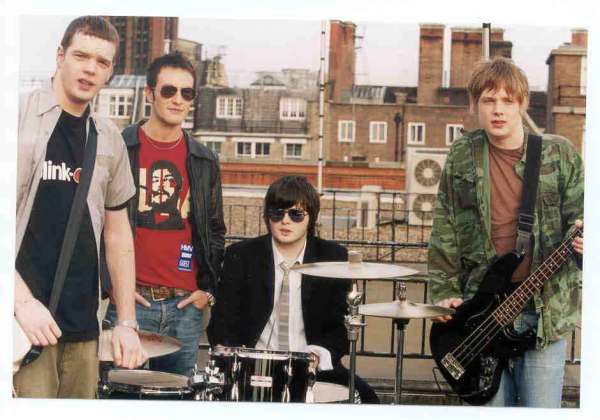 Tom White, drummer and main songwriter of the Electric Soft Parade, is circumspect about his relationship with Alex, brother and singer in his group as I chat to him in the luxurious confines of the bus before their Hop and Grape show.

“To tell you the truth, we don’t spend a lot of time with each other, although we’re on the same bus we try not to see too much of each other. That would make the situation a hell of a lot worse. We’re not that bad anyway, in terms of fighting”

Their music may be pretty traditional in the sense that they use guitar, bass and drums, but the sound is full of vigour, vim and vitriol, the likes of which haven’t been seen in the indie scene since, ooohh, the early Manics or maybe even the Mary Chain.

The NME is clearly enamoured, having included the boys in their top ten Brit guitar bands last year.

“The problem with that” Tom continues “is that at this point in time we’ve already had a record out and it’s been acclaimed, which is great for us but we’re a lot further ahead than people like the Coral or the Music, who’ve only had one or two singles out. So it’s hard to compare us as a band but I didn’t have a problem with it ‘cos I don’t think we sound like any of the other bands anyway. I just don’t like being lumped in with all these other bands” 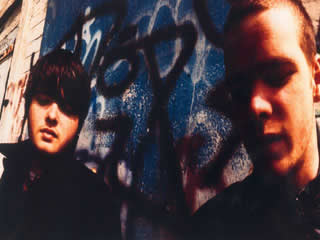 From: The Brain Farm

Ask the ESP whether they saw many bands at the Carling Weekend, and they recite a list that’d make any indie kid proud: Elbow, The Folk Implosion, Guided by Voices, Voy, Supergrass, Teenage Fanclub, Mogwai, Feeder, Trail Of Dead.

“I saw the Manics and they were brilliant!” reveals Al, before describing the elaborate blag he pulled off to see them at Leeds.

Alex’s flu soon becomes apparent. “Basically, I’ve been touring four months without any vocal training or exercise, so my voice is completely f***** And that stuff is my last chance of salvation”

Tom asks to down some of this white, pungent liquid that doubles up as a remedy, and what develops is a barney the Gallaghers would be proud of.

Some people might say the name Electric Soft Parade is a bit of a mouthful. Along with such bands as Cooper Temple Clause, Mull Historical Society etc what’s with the current fashion for bands with long names? Have all the one-word names been used up?

Tom: I was thinking about this the other day. It used to be The Smiths now it seems to be The and then a five letter word. Like The Faint who we saw supporting …Trail Of The Dead in London. Like there’s one band we know called The Concoma Maximum Lovegarden Orchestra. What else? Meanwhile Back In Communist Russia, that’s a good one. Or The Sisterhood Of Convoluted Thinkers.

You’re just making this up now aren’t you?!

Tom: No I’m not! Everyone f****** says that when I mention The Sisterhood Of Convoluted Thinkers! 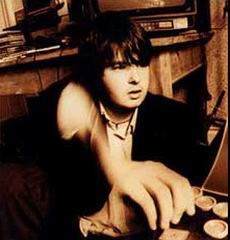 “Just today I was thinking how much I’d love to move to Melbourne and record the next album there – it just looked like a lovely place. It reminded me of so many places I’ve seen before but still totally different and unique and we immediately got a great vibe from the place. We understood what was cool about it. The people were totally lovely and charming. We felt that in Sydney and here (Perth) as well. People have given us such a good vibe. We’ve felt it all across Australia. It’s much better than England. It is, seriously. You go to England and it’s like you’re met with indifference or rudeness. It’s a really nice vibe here. I’d love to come over here and write or something. Spend a month or two and write. I don’t know”

“We were hyped up for a little while but I’m glad that they didn’t go for us in a big way. With all the shit going on at home with The Vines at the moment, everywhere you look it’s Vines-mania. It’s like What the f***? They’ve barely released an album. But that could set them up on a course for f****** up big time. A hell of a lot of press equals a hell of a lot of pressure”

“We can achieve things on our own level, and that’s what it’s about – being honest with yourself. Saying this is what I want to achieve, I want to write great songs. I want to have respect from people and respect for myself I suppose. That’s all it’s about, not about how big your band is. If you’ve got self-respect and you can look at yourself at the end of your life and go I’m so proud of that or I’m so glad I made those decisions – that’s all it’s about. All the rest is just rubbish”

Alex in The Electric Newspaper August 2002

He says many similar things as Tom in his interview above. When asked if they fight he says: “We do argue, proper arguments and stuff, but it’s always about stupid things. You know, a gig’s gone badly or a bad interview or something, or you’re stressing out about your girlfriend or whatever, and you take it out on the closest people – which in our case, happens to be a brother! But it’s not like we get into fistfights or anything; most of the time we get on really well, actually, and really act as support mechanisms for each other. I couldn’t imagine making music with anyone else”

With a critically acclaimed album under their belts, ESP would be forgiven for milking the accolade. However, they casually dismiss their mantle as the next big thing as “not really something we consider a lot… it’s job like anything else. There’s no point in making records for other people, it was more making a record that sounded good to our ears”

Despite the fact that their upbeat indie pop tune Empty at the End was played constantly during TV coverage of this year’s World Cup tournament, 18 year old Tom White who wrote the tune was less than enthusiastic about the whole affair. “I thought the whole world cup thing was shit. I hate the world cup and everything it represented. There were pictures of English dudes crying the day we lost. I mean, c’mon stop crying your heart out and being so f****** ridiculous. It’s a game. Fair enough it’s probably important to a few people, but I thought that was just stupid. I’ve never supported anyone, so I don’t really give a f***”. And as for the English captain, well… “He’s not even a real personality. Surely the whole point in celebrities is that they’re totally interesting and they attract people and David Beckham for me is just a thick twat. He hasn’t got anything to say that I’d listen to”

Questionnaire with Tom from Benicassim 2002 at lollipopmag.net

1. Are you happy to play this year at the FIB? Is it the first time you play here?
Tom: Yes, looking forward to it!

3. Are you staying for the whole festival?
Tom: No, sorry.

5. Are you playing other festivals this year?
Tom: Yes, Reading, Glastonbury and all the European ones.

6. Do you like this years lineup?
Tom: Yes, it’s the best in Europe.

7. Do you prefer playing in big festivals or in smaller places?
Tom: The smaller the better.

8. Do you usually drink or take drugs during festivals?
Tom: Oh, yes.

9. Do you think festivals are a good place to find a lover or make new friends?
Tom: I have a girlfriend!!

10. What are your best/worst festival memories?
Tom: Best: Reading. Worst: Somewhere in Europe (we were terrible)

11. What are your favourite songs at the moment?
Tom: Anything off the new Guided By Voices album. 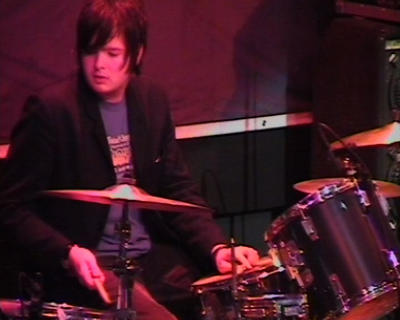 It’s by the time brother of Alex, drummer and co-singer Tom takes to the front for a predictably sumptuous Red Balloon For Me that you’re captivated and sure of their potential for enduring greatness, the constant build-ups, forceful, driving hooks and watchful, chipper presence offered from start to finish acting as vehemently attention-thieving.

“He bashes about behind the kit – occasionally freezing mid-stroke in true rock star style – or playing guitar as if it was born in his hands. He wrangles solos out like a cowboy lassoing a bucking horse. And what solos they are – structured and strategic with goals in mind. The architecture of this axe-work is a synergy of discipline and freewheeling fun”

It takes a confident band to begin not with a single, not with a classic, but with a faithful rendition of Always On My Mind. Most bands these days don’t go in for much in the way of banter but Alex White was in chatty mode. The band is a four piece live with Alex starting off on guitar while his kid brother bashes the drums. During the gig they swap over a few times, showing off their virtuosity. They played half the album including Biting, Empty At The End, There’s A Silence and Start Again; alas This Given Line was absent. There was a smattering of new songs in there which held up pretty well, though Hit The Ground Running with numerous tempo changes is a bit of a diamond in the rough at the moment. They encored with b-side Broadcast and the catchy Silent To The Dark. An impressive show from two very talented musicians. Dad, who was in the audience, must have been dead proud.

Tom is a charismatic bundle of nervous energy, scrunching his mop-top hair in his hands and throwing Elvis poses. “We’re really, really f****** scared” he admits, strapping on his guitar and looking a little uncomfortable without the usual shelter of his drum-kit.

The cascading melody of Empty at the End is gorgeous, Tom White’s acoustic guitar providing motion as the keyboardist adds pace. A wheezing melodica later enhances the sadness of Silent to the Dark, and they also premiere a quiet and thoughtful new song, The Wrongest Thing. But there is a submerged aggression to their music, and a cover of the Vines’ Get Free gives them an opportunity to shriek before dissolving into giggles.

The Zodiac Dec 2002 at nightshift.oxfordmusic.net

Tonight’s gig, in front of a packed and fanatical crowd, sees ESP showcasing six new songs in a set that confirms the White Brothers’ simple confidence in themselves and their abilities as artists. They know this is the best work they’ve ever done – brotherly love has never sounded so sweet… with a new album on its way, proper major league status can only be a matter of months away.